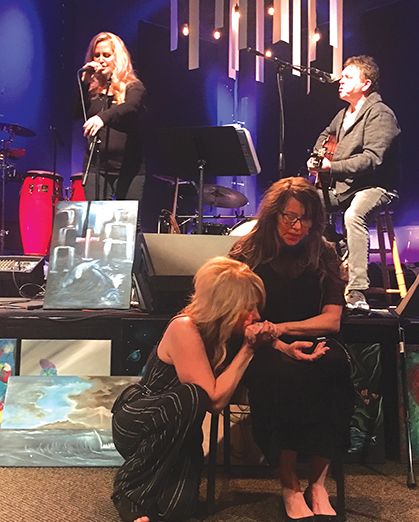 SACRAMENTO REGION, CA (MPG) - Higher Power Ministry hosts a recovery celebration at Lakeside Church in Folsom every Friday at 7:00 PM. Christian bands from a variety of genres such as blues, country, and rock and roll perform at the celebration. Lead Director of Recovery John Heath joked, “I turn the church into a nightclub every Friday night, with Jesus in the middle.”

A speaker talks to the group about recovery from addiction such as drugs, alcohol, gambling, food addictions, sexual addictions, workaholics, co-dependency, and self-harm. “These are life and death situations for the people that come in here, and there’s no such thing as a hopeless case,” said Heath. “We’re getting phenomenal results.”

Higher Power Ministry originated in 1992 at Central Peninsula Church in Foster City. Senior Pastor Jeff Farrar saw the need to help people overcome the addictions that were leading them to jail, institutions, and death. Pastor Steve Aurell, who was a ministry leader until his death in 2013, knew just how difficult it is to overcome addiction since he had once served 15 years in San Quentin Prison because of his own drug addiction. As Pastor of Recovery at Higher Power, Pastor Aurell saved many lives — including the life of John Heath.

Heath had a long history of addiction. During the early 1980s, at the height of the cocaine craze, Heath worked for the Cartel transporting drugs over the border. In 1983, after a serious overdose, he was admitted to the SHARE Unit in San Francisco, the nation’s first cocaine recovery center. He spent 60 days there, breaking medical records for the levels of cocaine in his system. Even after extensive treatment, his addiction continued for many years. In addition to cocaine, he used alcohol, heroin, and eventually moved on to meth.

Heath’s wife sought guidance at Higher Power, and Pastor Aurell urged her to stand by her husband in his time of need. Heath said that Pastor Aurell “was responsible through God’s Grace for saving my life, marriage, and my family.” Heath started attending Higher Power in 2006: “It was like no other church or place I had ever been.… I felt comfortable in my skin for the first time in my life.”

After a year of sobriety, Pastor Aurell asked Heath to become a leader in the Higher Power Ministry.  “I then knew that God had a sense of humor,” said Heath. After seeing firsthand all the good Higher Power had done for people in need, Heath felt compelled to spread the message to other communities: “God tapped me on the shoulder and asked me to start a recovery church.”

Heath moved to Shingle Springs and spent a year in prayer. Then he met Pastor John Voelz at Lakeside Church, who invited him to use the church as the site of a new Higher Power Ministry. Heath said, “We are so appreciative to Lakeside Church for allowing Higher Power to exist in Folsom and for letting us use their site to further our mission of helping those who are lost to addiction in the community.” Higher Power at Lakeside opened on July 7, 2017. “Seven, seven, seventeen — three sevens. I believe those are divine numbers,” said Heath.

“I started the ministry one person at a time,” Heath said. “We accept them however they are — high, drunk, or however they walk in.” Anyone who comes to the celebration can share with the group and seek help. “We stay there all night long if we need to,” he said. Higher Power Ministry leaders then follow up during the next week to offer additional help. If someone needs a recovery program, the leaders will find one for them. “We’re building a family,” said Heath. “It’s a huge support system.”

Many of the leaders are also recovering addicts, and Heath shares his story to inspire others to overcome their own struggles. Although Heath is not an ordained pastor, he found a way to ensure that Higher Power has a strong spiritual support system. He established an Elder Board comprised of two recovery pastors — each with 30 years of sobriety — who give spiritual advice and guidance. Heath said that Pastor Gary Freitas from Manteca and Pastor Dale Marsh from Oroville provide “spiritual direction, protection, and correction in the ministry.”

The events are open for anyone to attend. Heath said, “It’s a lot of fun. It’s not too churchy.” They serve free dinner, dessert, coffee, and other refreshments. Higher Power is a 501(c)(3) charitable organization; donation checks can be written to Higher Power Ministry and then mailed to Lakeside Church, 745 Oak Avenue Parkway, Folsom, CA 95630.